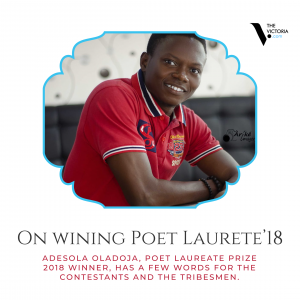 It was on a fair evening.

I can’t absolve myself of not being a troubleshooter or maker whichever way you want it. I was scrolling through my fellowship WhatsApp page amidst friendly banters when I saw the invite to enter a competition. I was not one for such. I hate deadlines. I hate competition more because I loved winning. How else was I the first to swim down Pa’s tunnel? When I think about that, I don’t feel proud of it because earth is you know, earth.

So, I took a step towards entering the competition.
The theme of the competition appeared quite cultural and I was one with a flair for my culture. I love the Yoruba culture. I feel a certain kind of joy to represent with the Yoruba people. Trust me, they amuse you more than they abuse you.

So, I looked into my archive and I found a poem sitting there, waiting to be sent forth. I had published the poem previously on Mother’s Day and it was quite the indigenous poem. So I sent it and wished myself the best. It was scary knowing I take losses badly. Yes. You read that right. Maybe it’s pride, maybe it’s self worth, maybe it’s spending too much time winning, I detest the idea of losing.

My poem celebrates the African women. It praised and extol their beauty, their perfect imperfection and their dynamism. It was dedicated to my mother first and then to all other women.

I did not know the criteria for judgment but I would soon find out that I needed people to vote for the contestants on twitter. that became a challenge as I detest any form of ‘begging’. I was in luck as my friends were eager to vote for me. They accepted it, reposted and the votes trickled in.
I was so happy to be announced as the winner come January. It left a great feeling on me as I, as you have read earlier, would have chided myself if I did not win. I was awarded Poet Laureate of the year, contacted and awarded my prize and there is no doubt that the Poet Laureate will be worth your time.

It is a competition for the best. The only thing to worry about is if you are the best. Are you?

Have a jolly ride to the top.